The only colors used in the design of Target CDs that were released on Geffen Records, are black and gray or silver.

The West German pressings released on this label all have a black target and lettering on a gray background, while the Japanese pressings exist in three different color combinations: most of them have a black target and lettering on a silver background, but in a few cases (Asia, Quarterflash) it is just the opposite: the black and silver (knock-out) target squares and lettering are set against a black background. This design, that was also used for the Japanese pressings of Randy Newman's "Trouble In Paradise" and The Modern Jazz Quartet's "Reunion at Budokan", is arguably one of the most beautiful designs ever created for a Target CD.

The third color scheme is identical to the one that is used for West German pressings on the Geffen label: black target squares and lettering on a gray background. "Breaking Hearts" by Elton John, a Target CD that I added to my collection recently, is a nice example of this. 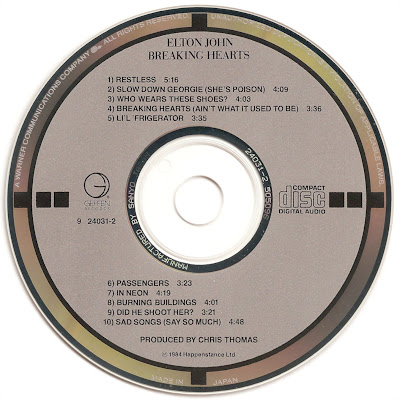