"René, I must do something!"

René Migratte looked up from the newspaper he was reading and turned his attention to the place where his life-long friend Albert Weinstein was sitting.

"You must do something about what", he asked.

"Well, you know that my friend, Lord Garett, is running a website on which he publishes all Target CDs that he has gathered in his Collection", Al continued.

"Yes, you have mentioned that to me several times in the past", René admitted, "but why should something be done now?"

"Yesterday I realized that on new year's day it will be exactly five years ago that this website was launched and I thought it appropriate to give my friend a present to mark the occasion. Do you perhaps have any suggestions?"

"Target CDs are those brightly colored CDs with a number of small squares printed in such a way that they look like a gunsight?", René wanted to know.

"Well, if you could give me a few of your old CDs, I could paint them in any color you like and I could do the lettering in any font you want and then you could give these to your friend to add to his Collection."

"That would be very nice, but these would not be real Target CDs".

Al took the smoking device out of his mouth, looked at it and didn't know what to say.

All the time René's wife Geargette, who was sitting in an armchair by the fireplace with her dog Ragett lying at her feet, had been listening to the conversation between Al and her husband without saying a word. But now she thought she had to intervene. She coughed to attract the attention of the two men.

"Al," she said, "do you remember that when René, you and I were visiting the US some thirty years ago, you were very surprised to see that a CD album was pressed in the USA rather than in Germany. I recollect you saying that it had to be a printing error since the West German version of the same album had a different background color."

"Oh," Geargette replied, "later that day I went back to that store to buy that particular CD. I must admit that I haven't played it much but it certainly must be around here somewhere... I think the last time I saw it, it was in that cupboard over there...". 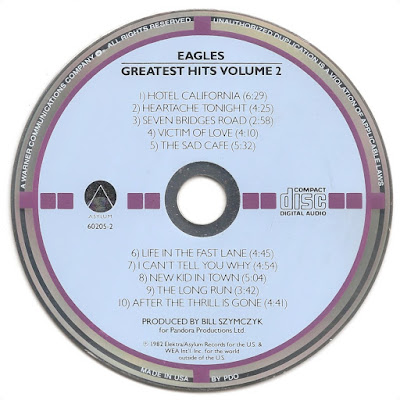