If the popularity of a CD can be measured by the number of different variations that were pressed of that CD, then Linda Ronstadt's compilation album Greatest Hits must have been very popular at the time it was released as a Target CD some thirty years ago.

The three most common variations have catalog numbers 106-2 / (64106-2) printed below the label logo at 9 o'clock on the disc and can be found with either MADE IN ☐ WEST GERMANY, MADE IN WEST ☐ GERMANY BY POLYGRAM or MADE IN WEST ☐ GERMANY printed around the perimeter. There also exists a variation with catalog number E2-106 that was manufactured by Columbia House and finally the album is also one of the few Targets CDs that were MADE IN USA ☐ BY PDO.

In this post two additional variations are featured that are not very easily found and that may well be the earliest CD pressings of this album.

The first one was MADE IN ☐ WEST GERMANY and only has catalog number 64106-2 printed at 9 o'clock. Another difference with the 106-2 variations is the lack of the GEMA logo at 3 o'clock, just below the Compact Disc logo.


The second variation that is shown above is identical to the first one but now the logo's and lettering are printed in silver. I have already seen a few copies of this variation and I therefore don't believe it is a manufacturing error. It may well be that it originates from a test run at the time when there was still some debate about which color scheme to use for Target CDs on the Asylum label. And since the combination of silver lettering against a light blue background is not very contrastive, the silver color might eventually have been abandoned in favor of black. 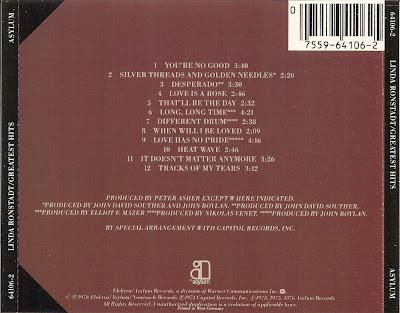 Both CDs came with inserts that are unique for these two pressing variations. They were printed in West Germany and have a barcode.